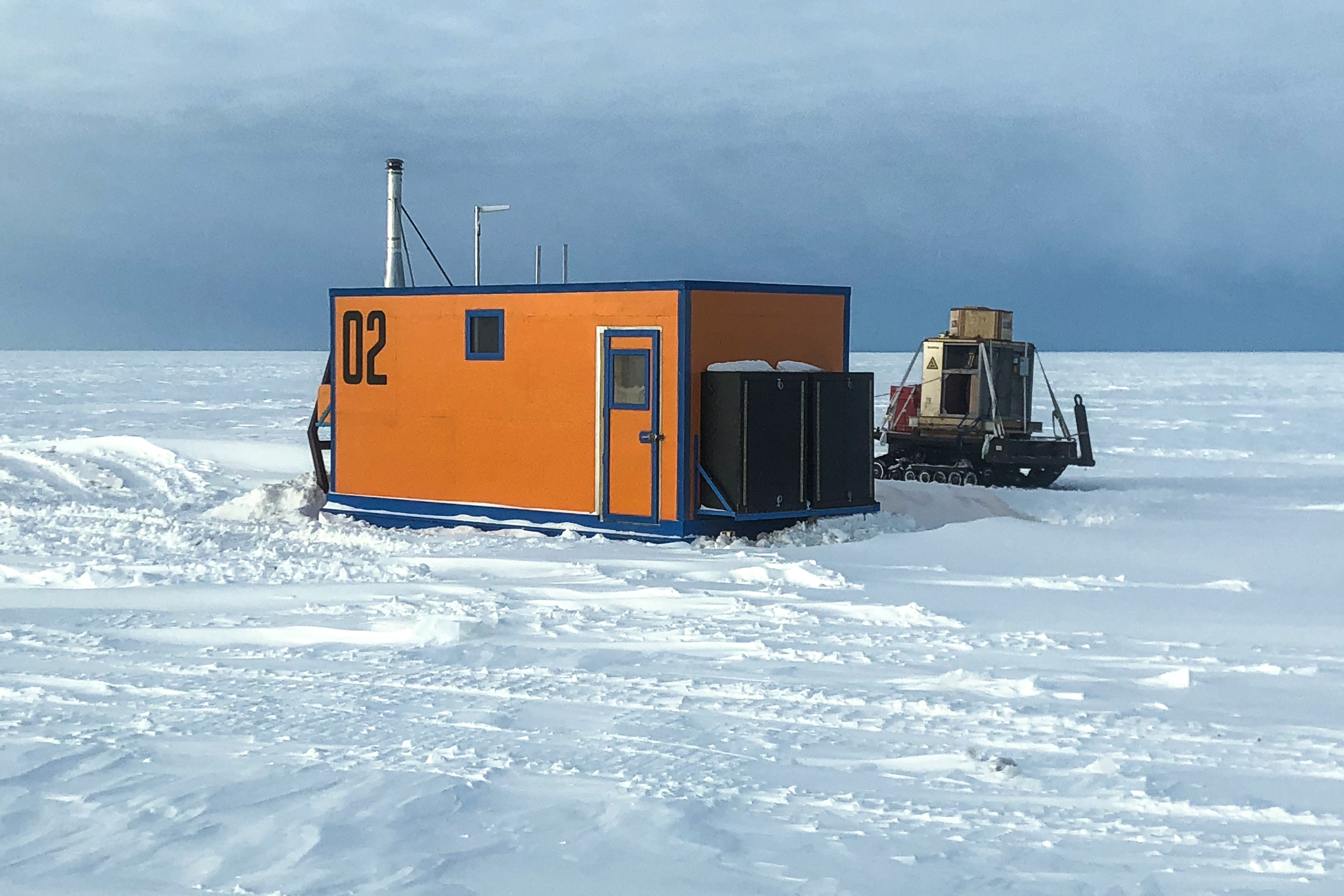 With assistance from Driller Graham Roberts, the SCINI (Submersible Capable of Under Ice Navigation and Imaging) team of Chief Engineer Bob Zook, and ROV Operator Mark Bowling successfully tested the clump weight below the sea ice near McMurdo Station.

But what is a clump weight and how is it being used? The SCINI ROV is attached to a tether line that extends from the ROV, up through the ice bore hole, and into the displays and controls on the ice surface. When suspended in water, a moving current can cause drag against the tether and increase drag on the ROV. A clump weight is a heavy object used to decrease the tether drag on the ROV through dividing the tether into two sections. One section connects the clump weight to the surface, and the other section connects the clump weight to the ROV. The heaviness of the clump weight stabilizes the section of tether that extends upwards and allows the section connected to the ROV to sustain less drag. The SCINI clump weight is more than just a heavy object as it serves as a data throughput for SCINI and is also equipped with lights, cameras, and tools to measure items such as temperature, depth, and pressure. These tools will be used to explore Mercer Subglacial Lake this December.

After further configuring software and hardware, the team successfully deployed the clump weight roughly 2,000 feet into the sea water and captured footage of organisms on the ocean floor. In the words of Bob Zook, “There were no notable failures and every issue was easily dealt with. Our elation is palpable. Three years of work has gone into this dive. There will be more important dives but for us this is huge!” After finding success with the clump weight, the team is continuing to prepare SCINI for its upcoming sea ice test.

The Geophysics team of Field Leader Matthew Siegfried, Assis. Prof. Kerry Key, Grad Student Chloe Gustafson, and Mountaineer Meghan Seifert completed their “Deep Field Shakedown” where they spent the night on the ice near McMurdo Station to prepare for life in the field. The team practiced survival skills such as building snow walls, setting up tents, and digging emergency trenches. They also used their overnight camp as an opportunity to further test instruments such as the team’s magnetometer, a device used to measure the relative change of a magnetic field at a particular location. When a SkyTEM geophysical survey flight happened to fly by overhead, the team saw significant changes in the readout of the magnetometer, indicating that it was functioning correctly. The next morning they completed their crevasse rescue training course where Mountaineer Meghan Seifert taught the team how to self-arrest with an ice axe, travel on a rope team, and build a snow anchor/pulley system for crevasse rescue. Once they returned to McMurdo, the team met with the SALSA Drill Site team (including ASC Science Manager Matthew Kippenhan, Traverse Supervisor Steve Zellerhoff, and Drillers Dennis Duling and Graham Roberts) to finalize the logistics of the deployment of a fiber-optic cable through the borehole and into Mercer Subglacial Lake for long-term temperature observation.

The team have also continued unpacking and loading cargo for their upcoming flight to Camp 20, which is roughly 100 miles from Mercer Subglacial Lake. The weather has presented challenges this season, delaying both inter and intra-continental flights including C-17 cargo flights from New Zealand. The good news is, a brief weather window allowed one C-17 flight to land in McMurdo which delivered the last of the Geophysics team’s supplies and cargo. The team are now packed and ready to head to the field and are waiting for a good weather opening to fly to Camp 20.

The Drilling team of Lead Driller Dennis Duling, and Drillers Graham Roberts and Jonas Kalin have continued building structures for the field camp and prepping drilling equipment for transport to Lake Mercer on the SALSA traverse. The team completed the construction, loading, and fastening of equipment within of the Command and Control (C&C) module, organizing and making room for extra equipment in the hot water drill container, and fastening and loading equipment into the Mechanical Equipment Center (MEC). The team also tested one of the generators that will be used to power the hot water drill at the field camp. The team is on schedule and once they finish organizing the Launch and Recovery System deck this week, the traverse will be ready to start their 650 mile drive to the Mercer Subglacial Lake study site.