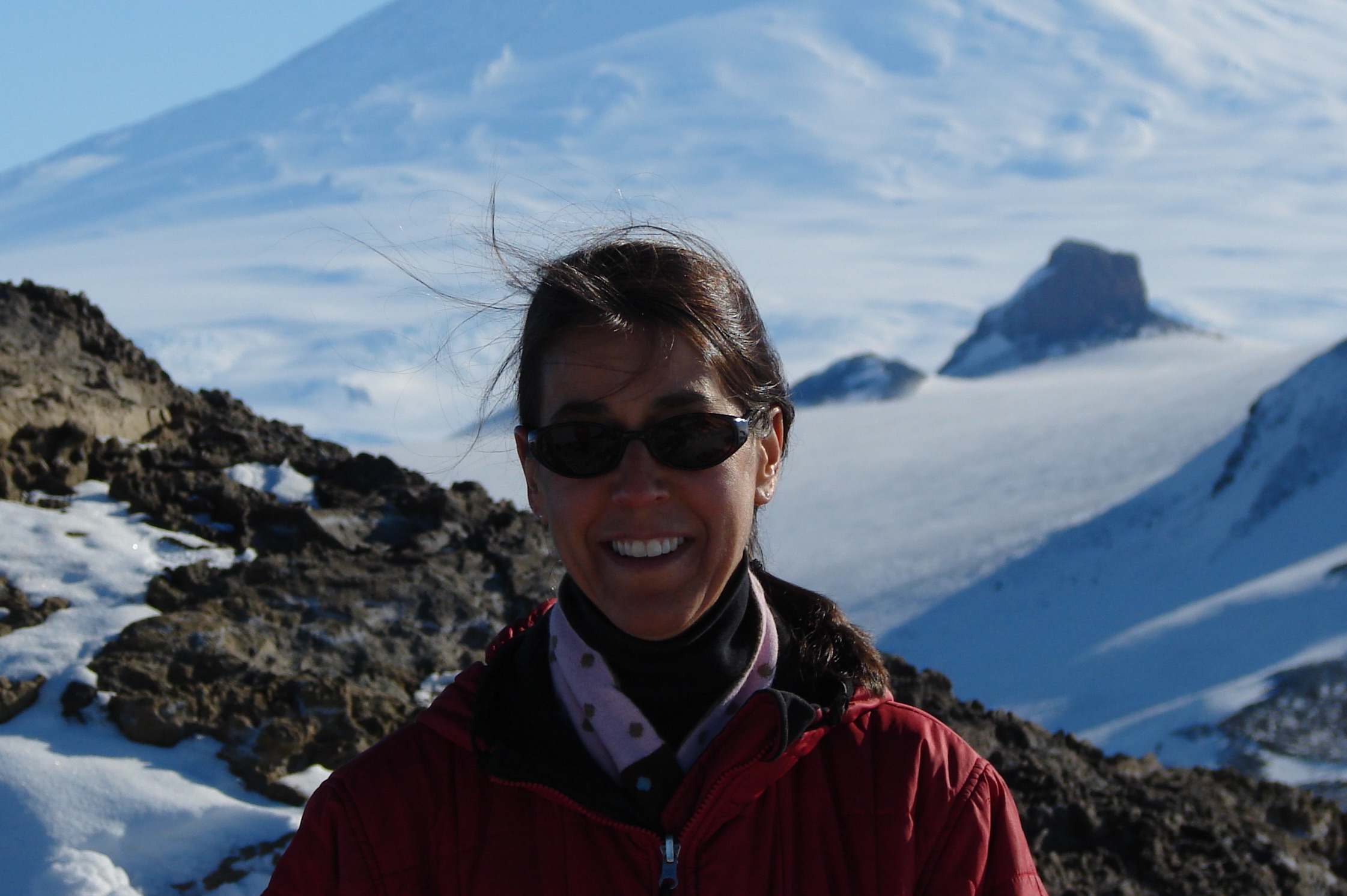 Principal Investigator Amy Leventer is a Professor in the Department of Geology at Colgate University. She is the recent winner of the 2018 Goldthwait Polar Medal for her outstanding contributions to the field of polar science.  Amy has been going to Antarctica since 1983, when she was a new graduate student. For her PhD, she spent several long seasons — three to five months each year — working on the sea ice in the McMurdo Sound area. She investigated how polar marine diatoms, single-celled algae with a glass shell, are transported from the sea ice and open water to the bottom of the ocean.

Amy took lots of samples of sea ice, and suspended sediment traps, which she describes as “basically upside down highway cones”, from the underside of the sea ice. These traps captured the diatoms as they were released from the melting sea ice to the water column, and then sank to the sea floor. Though these sediment trap systems could be automated, they were expensive, so her team visited each of about a dozen sites every week and sampled by hand. Her field group covered a lot of ground, traveling by snowmobile and larger tracked vehicles (see photo of our Nodwell, nicknamed T. Rex). Her team pulled their home and lab, nicknamed “Club Mud”, behind them. “It was an amazing time for me,” Amy says. “ Hard work in the most beautiful place on earth, and the forging of lifelong friendships! Both my children, Lizzy Mackay Reed and William Taylor Reed, have middle names based on field sites in the McMurdo area.”

After working for several years out of McMurdo, Amy switched to working off the Antarctic research vessels, with 22 research cruises over the years. “While many of those cruises have taken me to the Antarctic Peninsula, my favorite cruises have been those to the rarely visited East Antarctic margin,” she says. “To imagine that in some cases we might have been the first visitors to some spots – that’s pretty cool. In 2001, for example, we explored 5000 km of coastline, discovered several new sedimentary basins and returned with one-quarter mile of sediment core.”

Amy describes herself as someone who was always curious. “I was one of those kids who was always a collector: seashells, pebbles, insects, leaves, flowers, and once, a fistful of snakes,” she says. “Even as a kid, I was an organizer, so I think working in the way I do now with diatoms is pretty much a natural fit. I didn’t have a focused plan when I went to college, but I was lucky, and a single course, Paleoceanography, team-taught by two amazing professors, directed my way on this path.”

As a micropaleontologist, Amy studies tiny fossils, and spends most of her time working at a microscope. Her expertise is with diatoms, microscopic marine algae with a siliceous (or glass) shell. These fossils are one of the primary tools for reconstructing Antarctic climate. Individual species exhibit very particular environmental preferences; some prefer colder and icier water masses for example, while others compete more successfully as temperatures rise. Diatom shells can be exceptionally well-preserved in Antarctic sediments, so Amy’s job is to document their changing distribution through time in order to reconstruct climatic and oceanographic history.

Amy says that although she works on only small pieces of the climate puzzle, “I’ve always felt that I am contributing, in my own way, to something much bigger than myself.” She acknowledges that her academic career — a B.S. in Aquatic Biology, an M.S. in Marine Science, and a Ph.D. in Geology — has had lots of curves along the way, but that each unexpected turn has led her to new ideas, new colleagues and new friends.

Amy first met John Priscu, lead Principal Investigator for SALSA, in McMurdo in 1984, just two years into her Ph.D., but this is the first time that they are working together. “I am really excited to be part of the SALSA team”, she says, “and I am looking forward to new discoveries and surprises this field season. I’ve worked all around the Antarctic margin, but never on a project like SALSA, where I will have to learn new skills from David Harwood, who has much greater experience with older diatoms. Together, Dave and I (well, mostly Dave!) will use the diatoms to reconstruct the history of ice advance and retreat in Antarctica. I wish everyone had the opportunity to experience the stark beauty and incredible solitude of Antarctica.  People forget that there are still places here on Earth that remain unexplored – and that we still have so much to learn about Antarctica.”