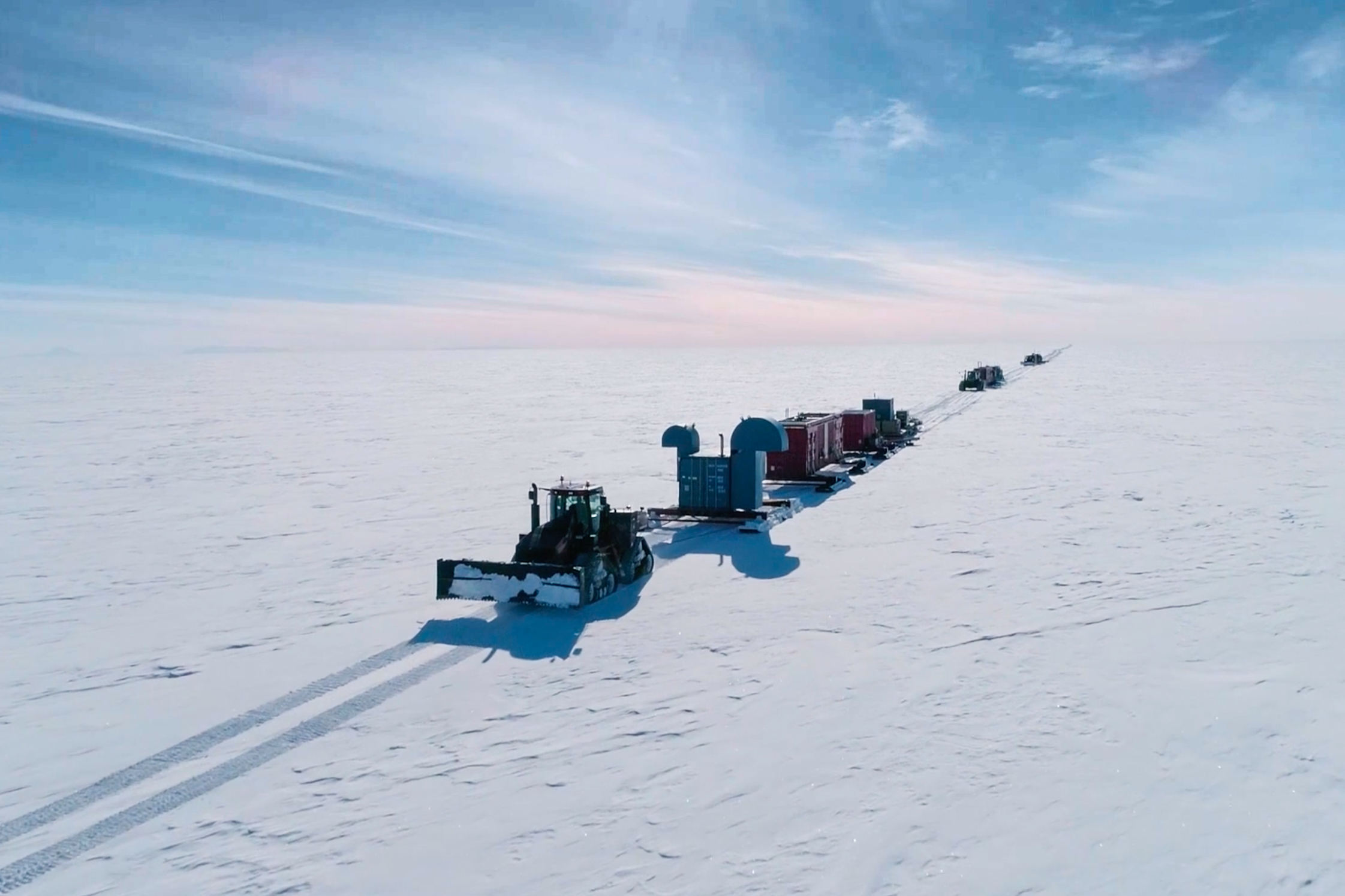 On Nov. 26th, the SALSA Traverse (a caravan of tractors towing drilling and camp equipment) left McMurdo Station and began their 650 mile journey to Lake Mercer.
They are scheduled to arrive at Lake Mercer on Dec. 11th where they will begin setting up camp and prepping the ski-plane runway for the arrival of the science team. See the short film following last year’s traverse here…

On November 21st, the team woke up to strong winds and blowing snow, and took the opportunity to finish storm-proofing the camp. After the winds died down, the team  got back to their planned activities of readying scientific equipment and doing a final clearing of the skiway for the upcoming SALSA Traverse.

The team spent Thanksgiving celebrating with lunchtime turkey melts and making up for lost time after snow drifts built up from the past days of wind. On Friday, they packed their sleds and headed out to the 2015 WISSARD borehole at the Whillans grounding zone 7.5 miles away from Camp 20, and installed a magnetotelluric (MT) station. With this station in and collecting data, the geophysics team has officially opened science for the season.

On Saturday, November 24th, the team installed more magnetotelluric stations in along a transect that crosses the Whillans Ice Stream grounding line. On Sunday, November 25th, the weather rapidly changed from light winds to blowing snow as the team worked on installing four more MT stations. As the hour-long install progressed, the holes they dug for their magnetometers closed up from snowdrifts. By the time the station was on and recording, the visibility was decreasing quickly, so the team decided to return to Camp 20. A first glance data from the first three magnetotelluric stations showed excellent results.

After a three-day springtime low pressure weather system with high winds and blowing snow, the team woke up to good weather on Wednesday, November 28th and spent the day on MT work, stopping by four stations to replace dead batteries and download data. The team also installed two new stations upstream to continue our floating-to-grounded transect.  Because magnetotelluric data is wind-sensitive, the low-wind, sunny day was perfect for data collection. Upon returning to Camp 20, Kerry and Chloe set up a shallow DC resistivity sounding experiment in an attempt to recreate an old Charlie Bentley experiment with newer equipment.

November 29th was another beautiful day on the ice stream, with winds rarely heading north of five knots. The team had a big day, servicing five MT stations, installing two new stations, and digging up and moved another. All eight instruments are now in the ground and recording, and their longitudinal line through the Whillans grounding zone embayment is complete. Matt Siegfried believes that this is the first MT survey across a grounding line ever collected in Antarctica.

The team hoped that the weather would hold the next day to work on SALSA Geophysics tasks: servicing GZ20, the GPS station in the area, and installing a phase sensitive radar to measure ice-shelf basal melt rates with hourly resolution over the next year. They visited GZ20, downloaded the past year of data, raised the GPS antenna, unjammed the wind turbine, and reconfigured the receiver to fix the iridium telemetry issue. After servicing the GPS station, the team installed the phase-sensitive radar.

The weather held steady, so they also dug up and moved one MT station that had been installed on November 29th. With the light winds overnight, a clean 20-hour recording provided high-enough quality data for the shallow mapping experiment and verified expectations that they can “turn” stations every day (given good weather). This will increase the pace of MT data collection.

On November 19th, Drillers Jonas Kalin and Dennis Duling departed for the South Pole, while Drillers Graham Roberts and James Roth stayed at McMurdo Station. Graham worked with the Traverse team to move and stage fuel bladders, and James worked on replacement batteries for their UPS (uninterruptable power supply) devices.

Graham worked on contingency plans for missing drill computers on November 20th, while tracking DNF crates on their way to the ice. In the afternoon, he continued to work with the Traverse team, while James continued work on the UPS battery replacement project. James and Graham spent November 21st loading cargo on the LARS (launch and recovery system) deck and preparing it for traverse, as well as assessing DNF crate needs for LC-130 flights.

On November 22nd, Graham and James troubleshooted Uninterrupted Power Supply (UPS) devices and discussed options for drilling without the computers, and reported that all drilling equipment is at SPOTSA (South Pole Operations Traverse Staging Area) and ready for traverse. On Thanksgiving Day, the team got both drill computers on the ice and in working order, and made final preparations for the traverse team’s Monday departure.

On the morning of Monday, November 26th, the Traverse departed for the SALSA field camp to cross 650 miles of the Ross Ice Shelf to the Mercer Subglacial Lake study site. and Graham and James completed the installation of batteries in the UPS. They also worked on inventorying, consolidating, and packing equipment for the field.

Dennis and Jonas returned from the South Pole on Tuesday, November 27th, and the team spent the next several days working on the wire winch encoder’s display and input signal, as well as making plans for the field so that they can get to work upon arrival.

SCINI Chief Engineer Bob Zook and ROV Operator Mark Bowling left the ice on Monday, November 19th and will return to McMurdo with the rest of the science team on December 6th.