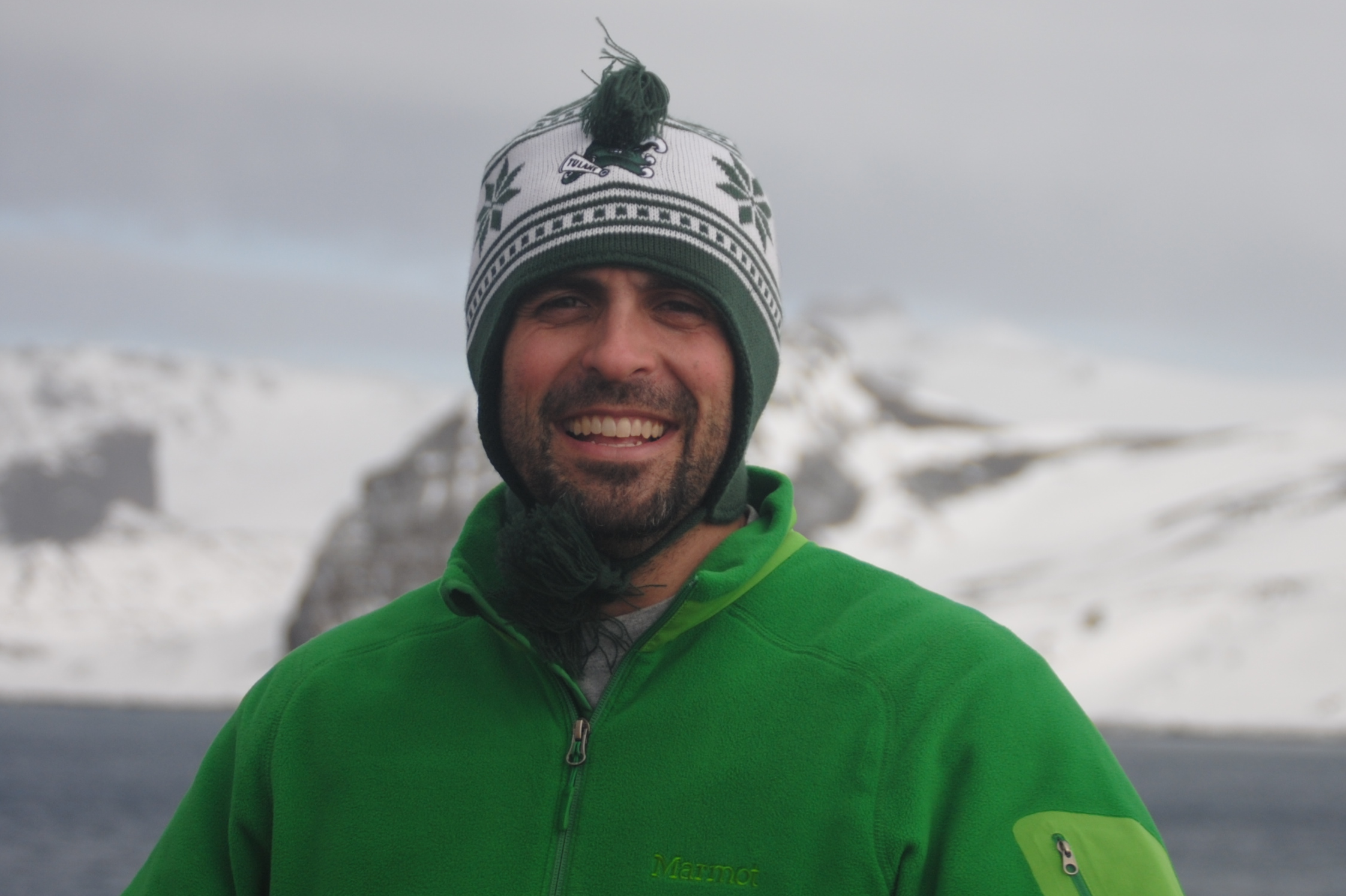 Brad Rosenheim is a Principal Investigator for SALSA, and is an Associate Professor in the College of Marine Sciences at the University of South Florida. However, he is no stranger to cold places: he’s been to Antarctica before, grew up in New Jersey, and went to the University of Vermont as an undergraduate.

Choosing Science as a Career

Brad chose his course of study due to skepticism of the State of the World 1996, which was required reading his freshman year of college. Instead, he wanted to be behind testing hypotheses about global change, overconsumption, and the carrying capacity of the Earth, rather than reading the numbers and forecasts that he’d seen in State of the World.  After earning his B.S. in Environmental Science in 1999, he went on to a Ph.D. program at the University of Miami in Marine Geology and Geophysics. He studied isotopic and chemical records of marine climate change recorded in the skeletons of long-lived sclerosponges in the Caribbean Sea.

Brad continued to develop his isotopic toolbox as a postdoctoral investigator at Woods Hole Oceanographic Institution. He developed the technique of ramped pyrolysis radiocarbon dating as part of a team that was developing a new type of gas-accepting accelerator mass spectrometer for 14C analysis. Since then, he has developed many applications of this technique, from river-ocean carbon cycling to tracking of environmental petroleum pollution as an assistant professor at Tulane University.  Brad’s recent move to University of South Florida has involved a renewed focus on southern ocean science including applications of ramped pyrolysis radiocarbon dating to sediments around the Antarctic continent, including difficult-to-date sub-ice shelf sediments.

With SALSA, Brad will employ ramped pyrolysis radiocarbon analysis to what he thinks may be the biggest challenge yet: subglacial lake sediments.  In order to perform this analysis, Brad will first have to obtain sediment from Mercer Subglacial Lake. “We have developed a borehole gravity corer in collaboration with Woods Hole Oceanographic Institution that will allow a 2500 pound corer to be dropped at a short free-fall through the bottom of the borehole and into the sediment at the bottom of the lake,” he explains. “Our goal is to be able to take a core longer than previous multi-coring efforts through coarse-grained diamict that is likely to be at the bottom of the lake.  In conjunction with the multicoring operations that have succeeded in Whillans Subglacial Lake (WISSARD), this approach will give us the ability to observed sediments deeper in time than previous subglacial expeditions.”

With sediment from both types of coring operations, the application of ramped pyrolysis radiocarbon dating will provide the most nuanced dating effort to date. The dating will have the ability to provide more precise information about past marine incursion to this site that may have provided organic matter to any communities present in the lake today. This allows assessment of the trophic base of the Mercer Subglacial Lake ecosystem as well as information about past ice shelf history in this area.

Brad’s prior trip to Antarctica was aboard a research vessel off of the western Antarctica Peninsula. He has also sent students on two other ocean-going expeditions, including one aboard the Korean icebreaker Araon. According to Brad, “research in Antarctica is challenging, even aboard an ocean-going vessel. My first expedition, in 2012, was marked by getting trapped in sea ice on the southern side of Anvers Island (luckily within range of Palmer Station) for five days. This unplanned sojourn at Palmer Station forced a dramatic on-the-fly change in our scientific planning.  Whether in deep field or on a ship along Antarctica’s margins, Antarctic research involved plans A-Z.”

Aside from his valuable research, Brad has been trying to make more people aware of how connected the population of Florida and other vulnerable coastal areas are to changes in Antarctic ice. He explains that it is easy to compartmentalize Antarctica as a far-off place that has little to do with our everyday life. “The reality,” he says, “is that if we live on or near the coast, it has a lot to do with our wealth, infrastructure, and our well-being.”