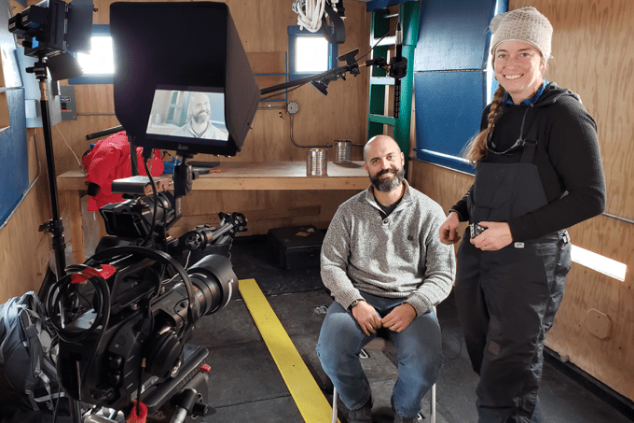 The SALSA Science Team has been busy preparing for their trip to Mercer Subglacial Lake. At McMurdo Station, they have been packing cargo and undergoing safety training for the field.

On December 12th, SALSA science team members David Harwood and Al Gagnon arrived in McMurdo after facing multiple delays and a boomerang flight (a flight that turns back around on the way from Christchurch to McMurdo).

Ryan Venturelli briefed team members on their way to the field about avoiding contamination between sediment lab and the chem lab during camp setup. Samples that are prepared in the sediment lab will be used to measure natural levels of radiocarbon, while the samples prepared in the chem lab use amplified levels of radiocarbon for their experiments. The rest of the team have further developed sampling protocols for the field and protocols for different possible sampling outcomes.

Kathy Kasic and Billy Collins from the SALSA Education and Outreach team have been filming the prep work, completed interviews with Ryan Venturelli and Principal Investigator Brad Rosenheim, and flew their drone at Observation Hill. Many members of the Science Team also had a chance to visit the pressure ridges, an area where the sea ice meets the land and the combination of tidal forces and moving ice causes ice to buckle, creating interesting ice formations.

The Geophysics team spent the day of Monday, December 10th setting up their camp to prepare for setting up MT stations the next day. They successfully installed their first three MT stations on December 11th on a balmy (25 degrees F) day. One of the field stations was installed within 300 m of the location of the 2013 WISSARD Subglacial Lake Whillans borehole.

Excellent weather allowed the three MT stations to record low noise data overnight, so the team dug up all three stations on December 12th and moved them to their next locations in the grid. The cross-flow lines are 5 stations long (10 km), which means that the Geophysics team has occupied their entire first cross-flow survey line.

Another day of great weather at Whillans Subglacial Lake on December 13th gave the team another excellent overnight data set from the three MT stations that they installed the day before. Their first cross-flow line (5 stations, 10 km) was complete, so the team started on the second cross-flow line that is 7 stations (14 km) long. They have high-quality data from the center station and the grid southwest half is currently deployed and recording. They also re-deployed the MT equipment set that was giving them anomalously noisy data in the grounding zone, with a multi-day plan to debug the system and identify the underlying issue. Matt also started a bistatic radar experiment, performing soundings at increasing offsets in an effort to constrain englacial attenuation.

After several days of still, warm weather the team awoke to winds on December 14th. The winds were near the 15-knot threshold for data quality, so the team visited the first MT station to see if they could recover the site and move it on to the next location, or if they’d have to wait for the wind to slow down. Fortunately, they found out that they’d had enough time before winds picked up to capture MT signals. They then recovered the three stations and moved them to the other side of the line to complete their second cross-flow line. As of December 14th, the team had 13 stations with data or currently occupied at Subglacial Lake Whillans in their first five days. They also narrowed the problem with the station that caused noisy data down to the power circuit on one of the pre-amps.

Kerry and Chloe surveyed and flagged a 375 m x 375 m square that will serve as the transmitter loop for a controlled-source electromagnetic survey that the Geophysics Team plan — this will be the first of its kind on an Antarctic ice stream. The team also received news that their 1500 m fiber optic cable to be frozen into the SLM borehole for long-term temperature measurements of SLM and the ice column above arrived in McMurdo.

On December 15th, the team drove upstream and hoping the data looked good, but found that the three stations upstream needed to record for longer. They installed three other stations to work on their third cross-flow line, this one on the downstream nose of Whillans Subglacial Lake. These installs took a bit longer and had some debugging, but we left all three happily recording. We now have two cross-flow lines fully occupied and our third with four stations deployed, matching our total number of stations recorded at the grounding zone (16). We still have 9 days of science operations left at SLW.

The team continued testing their noisy station and identified that the north pre-amp is the broken. They left the station to record over night with half-length dipoles to see if they can continue using the station. Matt also continued the bistatic radar experiment, recording at further offsets, and Kerry and Chloe finished laying out the EM transmitter loop.

On December 16th,  the team had a productive day with good weather. They recovered three MT stations and redeployed them, then replaced batteries and downloaded the data from the other three stations we have deployed to see how our controlled-source EM experiment fared. They now have 18 MT stations occupied or completed, including three parallel cross-flow lines that form a small 3D survey. They will continue to build out our 3D geometry over the nine remaining days of research at Subglacial Lake Whillans.

The team’s controlled-source experiments were successful the night before, marking an important milestone in their field season: the first CSEM sounding of an ice sheet. Matt also continued making headway on a bistatic radar experiment, increasing the transmitter/receiver offset, while Kerry ran another CSEM experiment to take advantage of the six receivers they have deployed within 6 km of camp.

On December 12th, Drillers Graham Roberts, Justin Burnett, and Dar Gibson flew to Mercer Subglacial Lake to begin the hot water drilling process. The SCINI team also completed another tank test at McMurdo and are adjusting the cameras equipped on the clump weight.