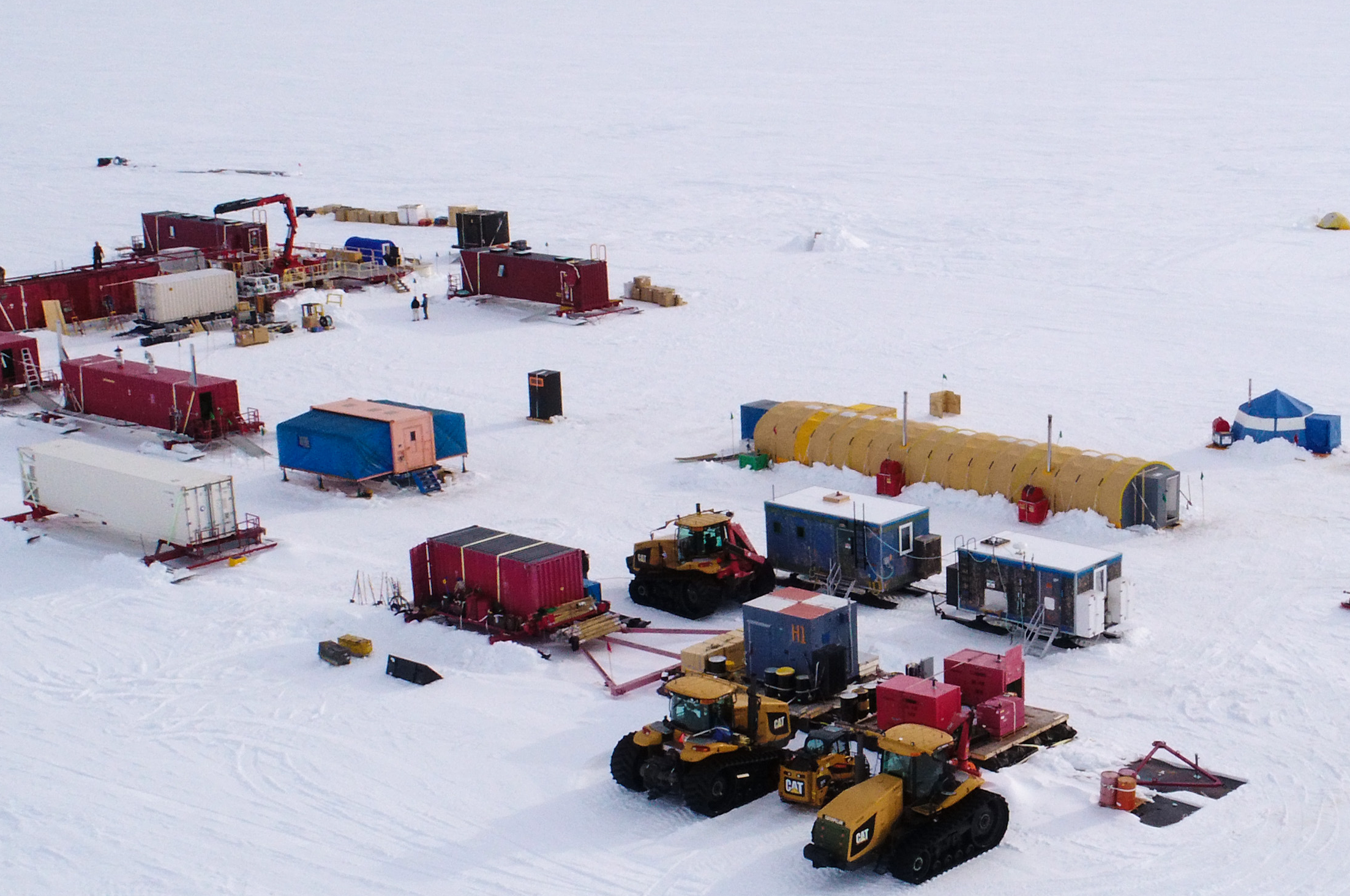 On December 18th, Drillers Dennis Duling, Ed Krula, and Anatoly Mironov; Scientists John Priscu, Brent Christner, and Ryan Venturelli; and two Marine Technicians arrived to the Mercer Subglacial Lake camp ahead of the rest of the Science Team. After assessing the camp, the Drillers Marine Technicians (MTs) started setting up the Launch and Recovery System (LARS) and the heating units, as well as moving the laboratories to their required location near the LARS deck.

The rest of the SALSA Science Team arrived on December 19th with approximately 8,000 pounds of cargo. The Drillers continued working on the heating units and supplying water to the laboratory through the 20th, and the Outreach Team continued to film and document daily operations at the camp. There are now 45 scientists, drillers, and support staff who will spend three weeks working together to drill 4,000 feet through the ice and sample from Mercer Subglacial Lake.

After a windy night, the team was able to accomplish a lot thanks to good weather on December 21st. The Drillers resolved fuel issues on hot water heaters, and installed the WISSOMATIC superstructure for the drilling hose and sampling blocks on the LARS deck. The Drillers also confirmed that the propylene glycol that is used to melt the snow did not contaminate the melt water that will be used to initiate drilling. The Science Team finished setting up the laboratories and calibrating equipment, and conducted a test run of the multicoring system. The SCINI command and control center was set up, and the remote controls and microphones tests were successful. Additionally, the WHOI winch that will be used to deploy the coring systems was tested and is working well.

The Outreach Team successfully flew their first drone flight on the evening of the 21st, and on the 22nd took 360 video footage of the tent city. The Outreach Team is also installing a Mobius action camera with the clump weight, which will be used to examine the integrity of the borehole, and continues to film drilling setup and operations.

On December 21st, the team took care of deferred camp maintenance due to stormy conditions over the past four days, and then headed off to recover three MT instruments that recorded through the short good-weather window and re-battery the other three deployed MT stations. The team carried the three extra stations with them in case they had time afterward to deploy the stations — at the start of the day, they only had three locations left in order to compete their 3D survey. Their deployment plan at Subglacial Lake Whillans had them working from the inside to the outside of the grid in case they ran out of time, so they had a long (13km) drive in the middle of the day to get from one end of the grid to the other. They recovered the first three sites in under two hours, replaced batteries in the next three sites, and installed two of the remaining three stations to complete 26 out of 27 necessary survey points in the grid. The team has now recorded MT data at 42 stations on the Whillans Ice Plain this season.

On December 22nd, beautiful weather overnight allowed the team to complete their grid and occupy their final MT station. They left one other nearby station running, and cleaned up the rest of the stations on the ice stream. Matt and Chloe performed GPS and radar surveys of both the bistatic experiment line and the EM transmitter, while Kerry finished his “tipper mobile”, where he mounted three magnetometers on a komatick sled for rapid observation of the magnetotelluric tipper (a measure of how vertical the induced magnetic field is). He spent the evening testing his contraption and getting a feel for signal-to-noise ratios with different deployment scenarios.

The team officially closed science operations at Whillans Subglacial Lake on December 23rd. They recovered the last two MT stations and packed up their camp to prepare for their move to Mercer Subglacial Lake. On the 24th, they drove four sleds of 2,500 pounds of cargo 63 km to the SALSA Traverse route, packed two more sleds, and prepared a Christmas dinner. They enjoyed sage pork tenderloin, mashed potatoes, roasted asparagus and brussel sprouts, and quinoa. The team will begin their two-day move to Mercer Subglacial Lake on Wednesday, December 26th, with a projected arrival to the SALSA Camp on the afternoon of the 27th.