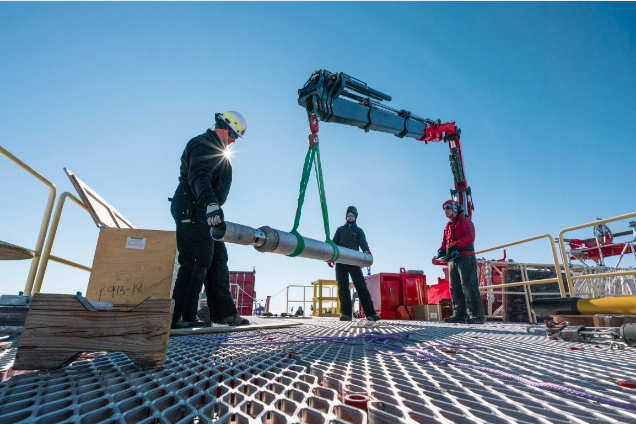 After four days of troubleshooting components that sustained wear and tear from sitting through two winters on ice, the Drill Team began drilling the main borehole on the evening of December 23rd and reached the lake faster than expected at 10:30pm on December 26th with a borehole depth of 1084 meters. The drill team then reamed (smoothed and widened) the borehole so that instruments can be sent down. As of December 27th, the first instrument sent into the lake was the Deep SCINI Clump Weight which captured footage of the borehole and the lake and provided measurements of depth, conductivity, and temperature.

Part of the drilling process involves sampling the drill water to test its cleanliness. The water has been tested twice thus far, and both tests showed the water was “as clean as filtered water can get”, in the words of SALSA PI Brent Christner. The drill water is run through filters that catch 99.9% of bacteria and particles. When the drill broke through the ice over the lake, only a tiny fraction of drill water mixed into the lake as the pressurized lake water rushed up the borehole and prevented most of the drill water from mixing into the lake. Although very little drill water will mix into the lake, the SALSA team has taken every precaution available to maintain clean access into Mercer Subglacial Lake.

On December 24th, Al Gagnon and two SALSA Marine Techs Michael Tepper-Rasmussen and Jack Greenberg, successfully tested the WHOI (Woods Hole Research Institute) Gravity Corer in a ‘mock’ borehole. The Gravity Corer, also known as a Deep Corer uses its heavy weight to take up to 20-foot core samples. The Gravity Corer will lower down the borehole to a specified height and then make a controlled freefall and use its weight to dive deep into the sediment.

The rest of the science team have continued preparing science equipment and adapting sampling plans. While waiting for borehole science operations to begin, the team has had a little extra time to sample snow layers near camp, play cribbage, build snow walls around tents, and enjoy the company of the SALSA team in the close quarters of the camp RAC tent.

On Christmas Eve, several members of the SALSA Team participated in the annual Antarctic HF radio field camp Christmas caroling. Although the fuzzy transmission made some of the radio calls very challenging to listen to, the SALSA team sang their own version of “Feliz Navidad” accompanied by Al Gagnon on the ukulele.

The Geophysics team rode in to camp via snowmobiles on December 27th after about five weeks of servicing and installing GPS Stations and installing electromagnetic sensors to map the region’s subglacial lakes. The team will continue their GPS station maintenance using SALSA camp as home base.

The Geophysics team’s move to Mercer Subglacial Lake was a two-day journey. On December 26th, after several days of packing, the team closed up camp at Whillans Subglacial Lake on a sunny day and headed south. After battling intermittent blowing snow, they arrived with our train of sleds at LA14 Camp for the night. This camp is approximately 100 meters upwind of SALSA GPS station LA14, located at one of the 2013/2014 WISSARD Lite boreholes. While camping at the site, the team serviced the station, bringing the entire station back to the surface after being buried over the last two years. Three of eight SALSA GPS stations have now been serviced.