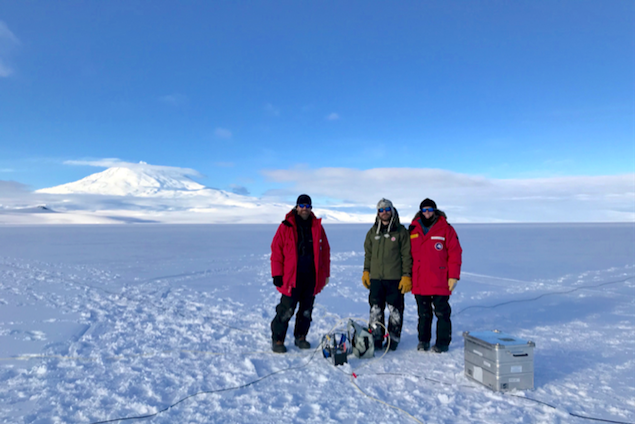 On December 27th, the SALSA Geophysics team arrived at Mercer Subglacial Lake after concluding their science operations at Whillans Subglacial Lake. After two days on the road, the team took the morning of December 28th off to catch up on rest before unpacking their eight sleds and preparing their gear to be returned to McMurdo Station.

The team also packed new sleds to prepare for laying out a temporary GPS experiment between Lake 7 and Mercer Subglacial Lake. They also worked on plans to visit three of their year-round GPS stations on the way to download data and ensure that the station will survive another winter in Antarctica. The final two year-round GPS stations will be serviced by air.

On December 29th, the team changed plans due to flat light in the morning, so instead of servicing three year-round GPS stations and laying out 11 temporary stations, they serviced the two close year-round GPS and laid out the first four temporary sites. Chloe, Matt, and Meghan successfully executed the GPS work, including finding a wind turbine that had sheared off one of the year-round GPS sites. Kerry continued to package the team’s gear for return to McMurdo on the flight planned December 30th, and the rest of the team joined him in the effort after their shorter day. Kerry also calibrated the pre-amplifiers for the MT instruments.

All four team members flew to the final three year-round GPS sites on the morning of December 30th, bringing camp chef Cat Hickman and Education & Oureach specialist Billy Collins on the 2-3 hour flight. They successfully visited all three remaining sites: LA07, LA08, and LA18. They serviced LA18 without issue, but found that LA07 and LA08 had bad CompactFlash cards that required new receivers. Upon return to Camp, Matt and Kerry helped the camp staff load the plane with their retrograde cargo for return to McMurdo Station.

Chloe, Meghan, and Matt took advantage of clear weather on December 31st to finish laying out the temporary GPS experiment between Mercer Subglacial Lake and Lake 7. The purpose of this experiment is to connect the dots between the 15-kilometer-spaced year-round GPS stations. On their way back from setting up the experiment, the team stopped at GPS station LA08 and fixed its broken receiver. Kerry installed an MT station at Mercer Subglacial Lake to see if the differences found within the lake itself by borehole operations are reflective of deeper structural differences. He also helped with the deployment of the downhole camera.

The off-site SALSA Geophysics work was successfully completed by January 1st, as planned, so the team shifted gears to focus on borehole work until the last day of their season, when they will pick up the temporary GPS sites. Chloe and Matt also installed an autonomous phase-senstive radar near the local year-round GPS station to measure how ice thickness changes over the next year as Mercer Subglacial Lake continues to drain. They also started preparing for the final borehole instrument, a fiber-optic cable that they will freeze into the ice column and subglacial lake to measure temperature over the next year or longer.