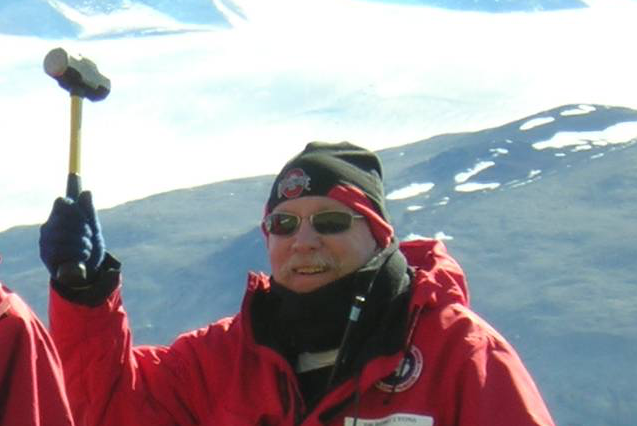 William Berry Lyons is a SALSA Geochemistry Principal Investigator and a Distinguished Professor of Earth Sciences at The Ohio State University.

Born and raised in Florida, Berry calls himself “an unlikely Antarctic scientist.” After receiving his undergraduate degree in Geology, he went on to do a masters and doctorate in chemical oceanography at the University of Connecticut. While he was doing a post-doc at the University of New Hampshire working on estuarine and coastal geochemical problems, he met a newly-hired glaciologist/glacial geologist, Paul Mayewski, from The Ohio State University. They became lifelong friends, and Paul had done his dissertation in the Antarctic. A year of so later, he received notice that he had been awarded an NSF grant to resume research on climate changes in Antarctica. He asked Berry to join the field party, and, in Berry’s words, “the rest is history”.

Berry and Paul worked together for a decade doing ice and snow chemical related research in the Antarctic as well as in Greenland and the Himalayas. At this time, Berry had begun to also do research on the geochemistry of lakes and streams, especially in desert regions around the world. Bob Wharton, then at the Desert Research Institute in Reno, was assembling a team to write a proposal to establish a Long-Term Ecological Research (LTER) program in the McMurdo Dry Valleys and he asked Berry to join the team. This is when he met John Priscu who was also part of the LTER team. Berry worked with the McMudro Dry Valleys LTER group for 24 years, and he says that “the friendships and collaborations have brought me great joy and satisfaction.When John asked me to be involved with SALSA,” he says, “I literally leaped at the opportunity. My Antarctic career has been an amazing journey, not only to do such interesting research in such a glorious place, but also to be associated with such great scientists and leaders as Paul and John. The morale of the story? Like I tell my students, don’t plan too far in advance as the serendipity of one’s career may be the better endgame.”

Berry is part of the SALSA biogeochemistry team, and Dr. Chris Gardner of his research group at The Ohio State University will be representing their group. They will be responsible for the collection of water samples for noble gases, nitrogen gas,  and methane, as well as the carbon stable isotope measurements of the dissolved inorganic carbon present in the water. In addition, they are also responsible for the measurement of radiogenic strontium isotopes and dissolved germanium and silicate.

In addition to Berry’s Antarctic research, he has researched lakes, rivers, and, more recently, soils all around the world. He is interested in what controls chemical weathering on landscapes, as well as the role of such anthropogenic activities as urbanization and various agricultural practices on water quality.

In addition to Berry’s research projects, he teaches at all levels at The Ohio State University. This semester, he is teaching a freshman seminar on polar environments. “I love interacting with the students and greatly value my role as a teacher and mentor,” he says. “As well as graduate students, I always have a few undergraduate students working within my research group.”

Like most faculty at universities, Berry also performs service, both internally within his academic unit and university, as well as for the external scientific community. He recently stepped down as the Chair of the NSF’s Office of Polar Program’s Advisory Committee, and he continues to serve as the Treasurer of the International Association of GeoChemistry.

A Love for Antarctica

Berry has traveled to the Antarctic many times since the 1980s, and considers himself very fortunate to have had the chance to go so often. “Most of these trips have been to the McMurdro Dry Valleys area,” he says, “although I have spent some time in other locations of the Transantarctic Mountains as well. I got an opportunity to travel with the Spanish Antarctic program to the South Shetland Islands to conduct aquatic research during the most recent International Polar Year. I found this environment so very different that the Antarctica that I was used to in the McMurdo region! It was a wonderful and productive scientific adventure. The Spanish scientists were great hosts as well.”

Berry thinks that the idea of a hydrological/hydrogeological system under the Antarctic ice sheets is a truly fascinating one. “Who would have anticipated this diversity of subglacial environments that have been discovered in the past two decades or so?,” he says. “Obviously the SALSA program is at the forefront of this type of research.”